Sometimes big surprises come in small packages.  This is the case with the new scenario based card game Conflicted. Conflicted, created by SurvivalLogics, contains 52 scenario cards and 2 rule cards.  Unlike reading preparedness articles for a “how-to” react in a certain scenario, Conflicted gets you to think through how YOU would respond to a myriad of survival situations after a SHTF event.

But the game isn’t just an individual mental exercise.  The game developers and many who have already purchased the card game are seeing the advantage of “feeling” others out in their families or preparedness group. For instance, SouthernPrepper1 recently did a video review of Conflicted and recounted how it helped to reveal the way a new member might react when the balloon goes up.  Watch the short video.

Here is an example of what a scenario card looks like… 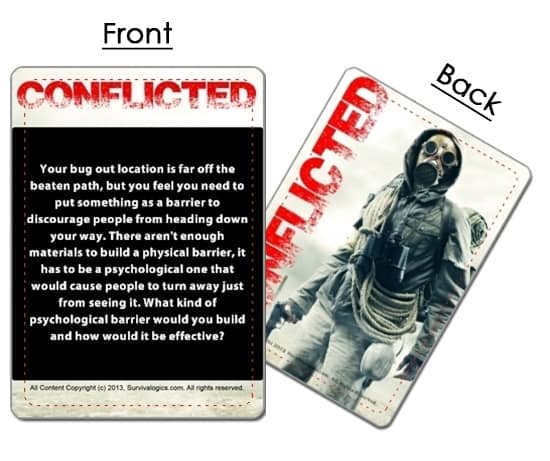 Source: The Official Site of Conflicted

This is how I plan on using the game.

Conflicted can be purchased from the official website.  At $14.95 a deck, the price and learning opportunities are way worth it.

Can you think of any other ways to use Conflicted?  Or share your evaluation of the game.

One response to Conflicted – The Game