Preppers - What You Need to Know About Preparedness 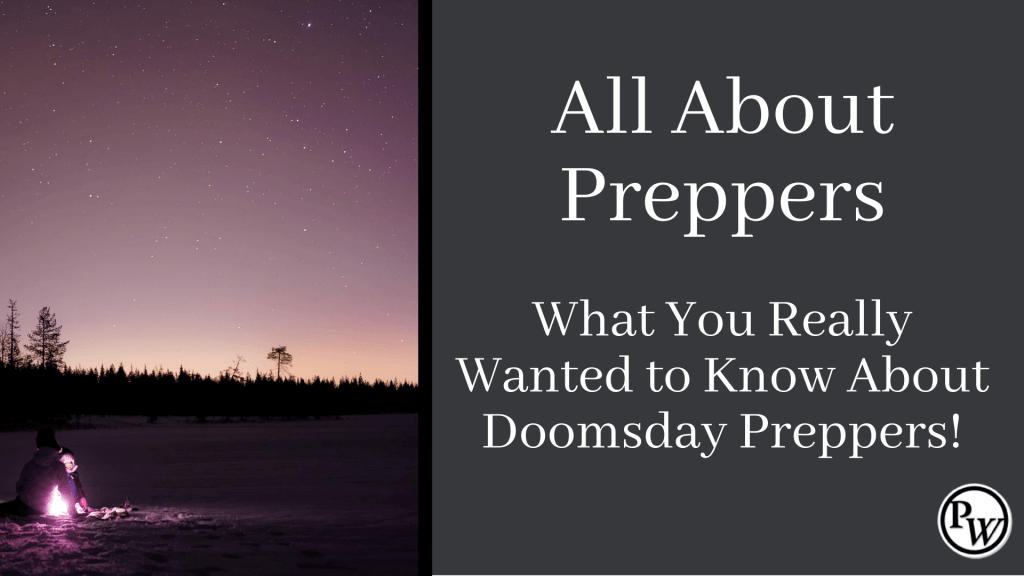 Listen!  This article is not for preppers.  This article is for those who are doing a search for “prepper” or “preppers.”  Now, if you are a prepper or new to preparedness, feel free to read this article to gain some insight.  But if you are wanting to know more about preppers and why we prepare, then definitely read on!

Preppers or the prepping lifestyle has received a bad wrap over the years.  For example, Dictionary.com, the first entry when you search the term “prepper,” offers this definition.

A prepper is someone who actively prepares (preps) for worst-case scenarios, such as the end of the world, by practicing survivalist techniques, including hoarding food. On a slightly less dystopian note, prepper can also refer to a prep school, someone who attended a prep school or sports a preppy look.

Why is this definition wrong or at least partially right/wrong?

Now sometimes, those bumps can be bigger than others, like a job loss, a family member getting sick or experiencing a natural disaster, like fires, floods, and tornados.  This is where prepping kicks in.  Being prepared is about responsibility.  It is about not waiting for someone to come to you and your family’s rescue.  It’s about you knowing what needs to happen and doing it!  Prepping is about being responsible and taking care of yourself and your family!

How many preppers are there in the US?

There really isn’t real data to tell how many preppers there are in the U.S.  An old, but popular Daily Mail article from Feb. 2012 reports, “As many as three million Americans now fall into the category dubber ‘preppers’ – people who are making detailed plans for the end of the world as we know it.”  Where did they get that number?  I have no clue and the article doesn’t specify.  The article was more a sensational piece based around the Doomsday Preppers TV Show.

One other piece of information that might be worthwhile mentioning here is a post on Finders.com in reference to a poll done in October 2017.  According to the post, they “commissioned a survey of 2,000 Americans, conducted by global research provider Pureprofile, and found that an estimated 68 million–plus Americans — more than 1 in 4 — have purchased survival gear on the back of recent political events or natural circumstances beyond our control.”  The post is titled, “Doomsday Preppers Statistics.”  However, I wouldn’t consider individuals who purchased “survival gear” as preppers.  And, the findings of the generations they included don’t match my own surveys.

Every survey I have done for Prepper Website, which includes age, shows that the vast majority of Preppers are over the age of 45.  Maybe because we have a little bit of life behind us and know how things “could get.”

According to a search on Wolfram Alpha, the current US population is estimated to be around 324 million.  That’s a lot of people!  How many of those people are taking responsibility for their families?  If there was a nation-wide disaster, could the government help?  Let’s just take a small state, for example, Delaware.  Again, let’s take a look at Wolfram Alpha.  There are 6.667 million people in Delaware.  If Delaware had a state-wide emergency, could the State of Delaware or the US government help them in a “timely” manner?  I would remind you of New Orleans and the aftermath of Hurricane Katrina!

Being dependent on any government for your family’s food, safety and health is not responsible!

What is prepper lifestyle?

So then, what does being a prepper actually look like?  First, yes, there are crazies!  Just like in every other aspect of life, there are people who take preparedness to the extreme.  You don’t have to go very far to find them.  The mainstream media will display them for all to see.  But the crazies aren’t the norm.

Most preppers are “every day joes” who love and care about their families.  They go to work, pay their bills, go to their kid’s extra-curricular activities and want to live the American dream.  Some are wealthy.  Some are trying to scrape by.  Many are from the middle-class and see their income and future eroding away.  Some are ex-military.  Some are teachers, doctors, stay-at-home moms, homesteaders, factory workers and everything in-between.  Preppers come from every segment of society and walk of life.  They just might not tell you that they prep!

Why won’t they tell you?  Because of the stigma.  Because like I said before, the media makes anyone who preps look like crazy people.  But when a prepper doesn’t need to run to the store and fight off the crowds because a hurricane or a blizzard is forecasted to hit the area, who looks like the crazy then?

How many doomsday preppers are there?

I will admit, I liked the show back then.  When the show was on, my analytics shot through the roof.  I would watch the numbers jump up as people watching the show searched for “preppers.”  And, the show did give the public ideas on ways to prepare, although they looked “crazy” at times.  Some well-known personalities in the preparedness community were on Doomsday Preppers.  People like Lisa Bedford, David Kobler (Sothern Prepper 1), Scott Hunt (Engineer 775), Dennis Evers and more are still producing content for the Preparedness Community.

In fact, Kobler and Hunt became the Prepper Experts that would rate each “Doomsday Prepper” at the end of every show.  If you are interested in seeing the Doomsday Preppers Pilot Episode with Bedford, Kobler, Hunt and Dennis McClung, I’ve linked it for you below.

How do I start prepping?

So have I convinced you that being prepared is something that you should do if you care about your family and want to be responsible?  The next question you might have is how do I start in preparedness?  Well, you are in the right place!

First, as you read articles, watch videos and listen to podcasts, you might get a little freaked out as you hear about how fragile our world actually is.  But don’t panic!  As they say in Men in Black, the world is always ending!

I would suggest that you start off with a plan!  What are you preparing for?  If you live on the Gulfcoast as I do, you will want to consider hurricanes.  Do you live up North, you need to consider blizzards and ice storms.  If you are in California, well, then just move!  Ok.  Just joking..a little.

Don’t forget the every day normal reasons to prep too.  Is your job secure?  Have there been lay-offs?  You might need to prep some new job skills or up your savings to get you through until you find another job  Do you have a bunch of debt?  Get a budget working for you!  Debt is never good!

Have you checked your insurance lately?  Life happens and we forget to update and audit our insurance needs.  Life insurance, health insurance, vehicle insurance, and home insurance should all be visited for the appropriate coverage.  Talk to your agent!

Do you have any bills you can get rid of?  Do you still have that gym membership in the “hopes” that you will go and start your journey to a rock-solid body?  Yeah, cancel that one!  What about cable and your cellphone?  Do you need all of those services or all the bells and whistles?

Then, consider your food storage.  Let me ask you this question.  If you had to live off the food in your pantry, how long could you survive?  You can stock-up by just going to the grocery store.  Take my free video course to show you how – CLICK HERE.

Lastly, you might want a checklist to go over.  I created a free, downloadable Prepper Checklist for you – Get the checklist here.

When it all boils down, preparedness is just common-sense.  Before there were 24-hour stores, Amazon and the internet, people had to prepare ahead of time for what they needed in the future.  If you go back to our agricultural days here in America, if our great, great grandparents didn’t save the seed from the previous year’s crops, or they didn’t preserve some of their food, they starved!  They weren’t preppers!  They just knew they had to make good decisions.

Hopefully, this article has piqued your interest and encouraged you to learn more about preparedness.  If you want more resources; 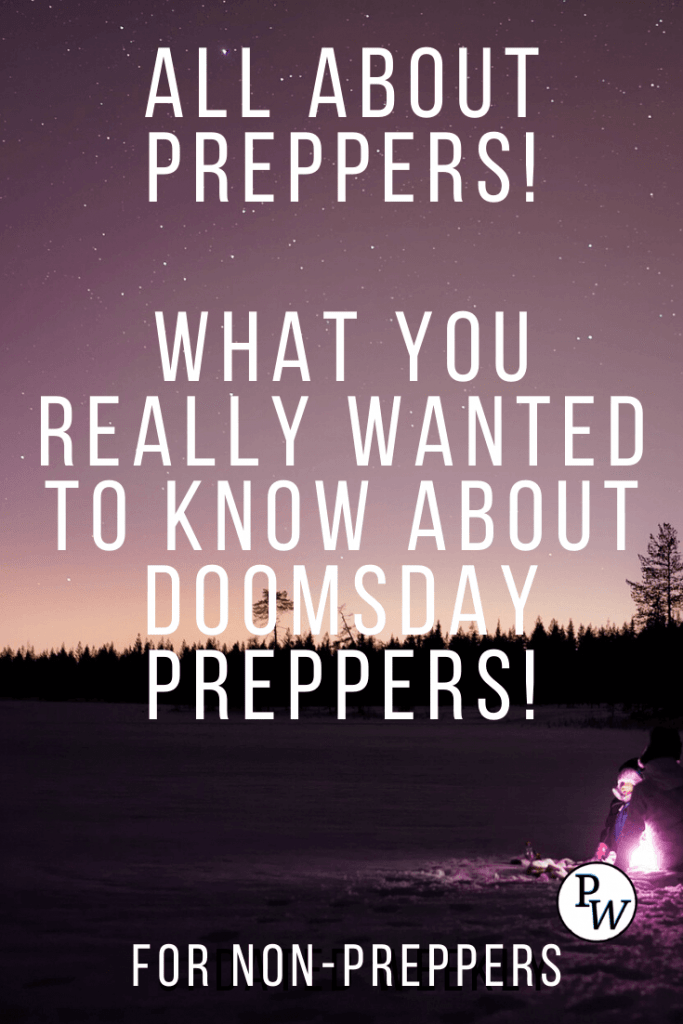