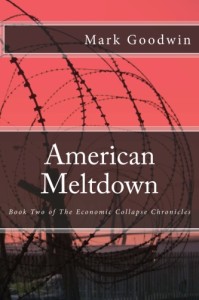 There are many ideas in the Preparedness Community about what the SHTF would look like. On one extreme, preppers are expecting the Golden Hordes and the world to look much like The Walking Dead, absent the zombies. On the other hand, preppers are expecting a slow spiral down where our lives are disrupted or even changed here in the US, never to recover the title the “Land of Plenty.” Like my views on End Times Prophecy, I try to take all the views in and keep my eyes open and stay prepared.

It’s easy to take in all the views when I’m reading articles to post to Prepper Website. I read many more articles than I actually post on the site. Lately, I have had to purposely refrain myself from posting articles on the economy and collapse. There is more to preparedness than just that. However, after a few years of running Prepper Website, I have come to the conclusion that the more likely SHTF scenario would be an economic collapse or a pandemic.

In Mark Goodwin’s new book, American Meltdown: Book Two of The Economic Collapse Chronicles, the United States experiences an economic collapse. At first, there are pockets of disruption and hardship as the economy comes to a slow death (see Book One). But the slow spiral down soon picks up speed and many of the things that you read about that “could happen” on prepper and alternative news sites come to life in this book.

Goodwin has a good grasp on economic and preparedness issues. So his book, although a work of fiction, incorporates a lot of teaching on economic, preparedness and security. For example,

Matt said “I have a small hygiene kit and a good-sized medical kit. The medical kit has aspirin, a small bottle of Betadine, a small bottle of alcohol, antibiotic gel, Band-Aid Tough-Strips, a medical
instrument kit, sutures, antibiotics, Tylenol 3 with Codeine that was left over from dental surgery Karen had a few years back and an Israeli Battle Dressing.”

The Israeli Battle Dressing or IBD was a sterile, self-contained, six-inch compression bandage for severe wounds. Israeli soldiers had started carrying them many years ago. The design had caught on and now soldiers around the world carried them into combat. Adam asked, “What type of antibiotics do you have?” Matt answered, “Amoxicillin. The brand is Fish Mox which was manufactured for fish tanks, but I would rather take drugs for fish than risk getting gangrene. We also have a good supply of Fish Flox, which is Ciprofloxacin. Cipro is much harder on the stomach, but if an infection has already set in, it is a more sure method of killing it. Cipro is also one of the few antibiotics that’s effective against Anthrax.”

I thoroughly enjoyed “listening” to American Meltdown. I listen to podcasts all the time while I’m in my truck. So, listening to this book was the right choice for me since I don’t have time to read many books right now. The audio files burned easily to two CD’s.

I’m also a sucker for a continued story. I like following characters through multiple books. I’m looking forward to the next book in the series…in audio of course!

Lastly, this book is overtly Christian in nature. Goodwin quotes a lot of Scripture and one of the main characters is a pastor. If you are easily offended by reading Scripture, prayer, preaching, etc… don’t get this book. But if you are a believer, and your feel your faith will play a major part in any SHTF scenario, this book is one of inspiration as people believe and trust in God for His divine protection and guidance.

American Meltdown: Book Two of The Economic Collapse Chronicles, can be purchased on Amazon in paperback, Kindle and audio format. To learn more about the author, you can visit his site, PrepperRecon.

“America, the President has announced plans to take military action against the Coalition States. As war has been declared against us, we must begin to prepare. We sought only to keep to ourselves and observe the laws of the Constitution, but we will stand to defend ourselves and our sovereign soil.

The governors and state legislatures of the Coalition states and territories which include Idaho, Wyoming, Montana, Kentucky, Tennessee, North Carolina, South Carolina, Texas, Eastern
Washington, Eastern Oregon, and Northern Colorado have unanimously appointed me to be the Commander in Chief of what they have agreed will be called the American Coalition. I humbly
accept this appointment. I pledge to serve the citizens of the Coalition and defend the Constitution to the best of my ability.

There are those living outside of those states who also support our cause. I encourage you to continue to let your governors and lawmakers know that you would like your state to join with the
Coalition in defending freedom. If you see that goal is not going to be possible, we will do our best to make a place for you here. On the other hand, there are no doubt those within the borders of the
Coalition States who oppose the decision. To them, I will quote Samuel Adams. ‘If ye love wealth better than liberty, the tranquility of servitude better than the animating contest of freedom, go home from us in peace. We ask not your counsels or arms. Crouch down and lick the hands which feed you. May your chains set lightly upon you, and may posterity forget that ye were our countrymen.’

We do not wish you harm, but there is no place for you here in the American Coalition.”