Why Be Subjected to Ridicule by Appearing on “Doomsday Preppers”

When “Doomsday Preppers” contacted me and asked if I would be willing to put my family on their show I was reluctant, but it was put up or shut up time. As a former police chief, I’ve written for years in my spare time (when I’m not building signals) about disaster preparedness and recovery, terrorism and business continuity for some of the most prestigious security, business and government oriented publications in the US; most of them on assignment. My emergency response book has sold over 160,000 copies globally to police, fire, the Secret Service, all branches of the military and government, and is used by numerous Fortune 500’s as an emergency SOP. How could I turn down the opportunity to preach preparedness to a national audience?

One concern I had was that they would do things like call our gateless property that has “welcome” signs hung about, a “compound”, or take other “dramatic license”. Granted, they did stage some scenes to “spice things up” but after all, it is TV and it is entertainment and quite frankly, preparing is boring.

We are not prepared for doomsday; I simply advocate being prepared for any type of crisis that might affect my family. Act of God or act of man, their safety is paramount. If people wish to put the survival of their loved ones in the hands of corrupt, dysfunctional, self-serving political and financial systems that has each taxpayer owing $135,732.00 (as of 2/11/12) that’s their right. Source http://www.usdebtclock.org/

Our preparedness has allowed us to ride out several snow storms and power outages without a hiccup. When a massive forest fire encroached, we took in families and livestock because we were prepared, not for doomsday, but for fire. Our grass was green and mowed, with a huge safety buffer and portable water tank, pump and hose. Those that didn’t have basic disaster prep in the form of a defensible space fire plan lost their houses because it always happened to “someone else”.

As far as my kids go, they are taught skill for life, not disaster skills. Things like how to change their oil, starter, brake pads, how to do some basic wood and metal working so they can build things. My girls all know how to completely service their vehicles bumper to bumper because it saves money, helps insure that some unscrupulous mechanic won’t be able to take advantage of them, and might get them safely home if their car breaks down.

I am not a tree-bark eating, live-in-a cave type of guy. I simply believe in the Boy Scout motto, and feel that the onus of survival rests squarely on our shoulders. Look at all the people sitting on roofs post-Katrina that didn’t have the foresight to take food and water up there after they pooh-poohed numerous warnings to evacuate. We have a totally oblivious generation whose entire existence is “i” toys, worshipping vacuous celebrities and brawling over sneakers.

As far as security goes, there are no guarantees whatsoever in life so we will continue to simply keep an eye peeled and trust in God alone.

I’ve had some pretty wild things flung at me for being on the show, (and as a cop) but one thing about age is the older you get, the less you care about what other people think. If TSHTF and I weren’t prepared, I couldn’t face my family.

If anyone saw the show and realized that they should invest in some basic prepping, that’s great and it was worth it. A family that has a one or two month’s supply of food and water will be less of a burden (and a threat) on an already over-taxed emergency response system. If they want to take it further, good for them. For those of you that think we’re nuts, you’re absolutely entitled. Just be sure you enjoy the Kool Aid.

Editor’s Note – Dennis truly believes in the Preparedness lifestyle.  It is not a fad, nor is he just seeking his 5 minutes of fame.  I would encourage anyone on the preparedness path to visit Dennis’ site above and check out his book, “How to Handle a Crisis.”  The book is written so that a child can understand it.  It covers topics from Auto Emergencies to Identity Theft to Terrorism, First Aid, Post-Disaster Check Lists and much more.  It definitely is a book that every family and/or person should have readily available. 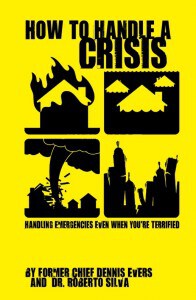