Eyes on Your Neighborhood Collapse - The Slow Decline

The Decline You’re Not Seeing In Your Neighborhood Collapse 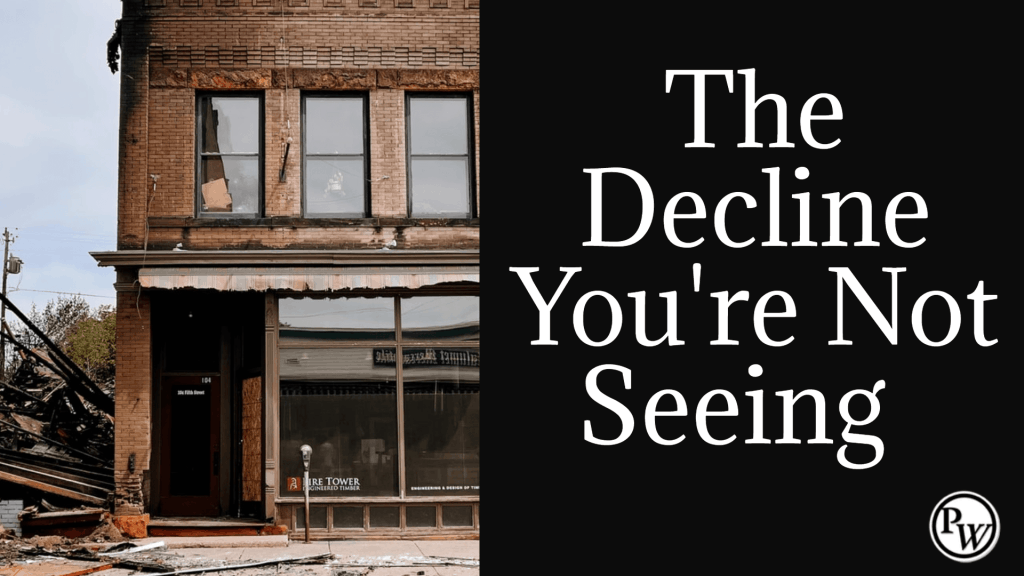 The economic collapse that you aren’t prepared for isn’t the sudden drop in the markets or everyone running to the banks after the government has declared a bank holiday. The economic collapse most people aren’t prepared for is the slow slide that happens when you don’t even realize it! While you have your eyes on all the things that are in the news cycle, crime is going up, prices are going up, neighborhoods and infrastructure start to collapse as well as your quality of life. It finally hits you after 10 years when you finally take a good hard look at what has happened around you.  Are you in a neighborhood collapse?

On September 20, 2021, Prepper Website celebrated 10 years of sharing articles, podcasts and videos with the Preparedness Community.  The very first article that I ever posted was one from STHFplan.com.  The post was a reshare of one of Fernando Aguirre’s articles concerning socioeconomic collapse.  The thing is, his article is more relevant today than it was 10 years ago! I shared my reflections on a recent podcast.  But the below article is a recap of my final thoughts.

So, if we are living a slow version of an economic collapse, what can we do?

Choose to be more aware of what is going on around you. Pay attention to what’s going on.

I’m always weary of social media. But if you are going to be on it, use it to your advantage. If you use Facebook and the Next Door App you can get a lot of local information.  You’re going to have to deal with the whiny people of the world like the ones that cry about, “so and so has left their trash out on the street” or “put their put their trash out on the street two days before the trash comes to pick it up. That’s so trashy.  It is making our neighborhood look trashy!”

But I’m telling you, I find great information very quickly in my neighborhood Facebook group when I go and people have already asked a question that I might have wanted to ask. There are people out there that are providing up-to-date information.  Maybe some of them are just doing it because they don’t have anything better to do, right? But this is a great resource to help you stay aware of what is going on around you. There are neighborhood and city groups that you can join.

One other thing you might want to do is check your crime stats. Not every police organization shares their information with the government.  So, you really have to know if your area is sharing or not.

There was an article by Survival Sullivan called Site Recon for Tactical Prepping and Bugging Out. I recommend it, not necessarily for the bugging out piece. But that article did provide a lot of great information as far as looking at different locations and really went into detail about maps and using maps that you can find online for free.  You’re taking that information not necessarily for the reason of the article, but for being able to look at your own local situation.

Keep Eyes on Your Budget

Keep an eye on your budget and how much money you’re spending.  How much money is going out to food?  If you are not looking at your budget and you’re not looking at your money, maybe you are blessed to the point where you don’t have to pay attention to those types of things.  That’s great! I mean it’s great to be blessed that way.  But I think you still need to be paying attention to your expenditures.  You might not have felt any kind of pinch with what has happened in the last 10 years. You might have been able to absorb all the extra costs that are out there.

Here’s an example. We bbq’d last weekend when my parents and son and daughter-in-law came over. But the meat that I purchased at the meat market is crazy expensive. I mean, it just continues to go up.  I’m very aware of that cost.  I’m blessed to be able to invite family over for a meal and barbecuing is still a lot cheaper than going out to eat with everyone. So, I’m okay with paying the extra cost.  But I’m very aware of the prices and the prices that are just continuing to go up.

Keep an eye on your budget and make adjustments as you need to.  One thing that I have said in the past is how you used to go to the grocery store and spend 100 bucks and walk out with a whole basket full of groceries.  But now you can spend 100 bucks and you don’t even need a basket to take the bags out. You just walk out of there with two plastic shopping bags and you’re done, right? Maybe I’m exaggerating a little bit, but depending on what you’re buying, that could be very true.

Pay Attention to Your Local Situation

The next thing to pay attention to determine if you are seeing a neighborhood collapse is to look at the condition of local stores.  Are things getting trashy or does it look like buildings are being let go? Does it look like there’s no upkeep?  Again, are dollar stores coming in and replacing other stores that have been there in the past?

Those types of observations help to give you an idea of what is going on.  If you lived somewhere for a while, try to go back in time, if you haven’t been the type of person that has been paying attention, and try to remember what was the last store that was at a certain location and how long it’s been closed down.

I remember there was a hardware store when we moved into our home.  It was an Ace Hardware and it was probably around for about a year and a half after we moved in. Then it shut down and went out of business.  It was partly due to Walmart and Home Depot and the fact that there is another Ace Hardware that’s a lot bigger, probably about three times the size of it about 10 minutes away.

I remember I went in there as they were going out of business. I bought a rake, a shovel and a saw. I still use them all today. Throughout the years there was a bouncy place, the kind where you have birthday parties at that location, then it’s changed to a thrift store type of business.

Is It Getting Trashy

Next, make notes of trash and if people care about keeping up their homes and businesses and the infrastructure around your area.  I know our neighborhood comments on the neighborhood Facebook group a lot about the upkeep of the neighborhood entrances. Are they mulching? Are they putting in new flowers with the seasonal changes and things like that? That’s still important to the residents in my neighborhood, and that is a good sign.

Look around your community.  Is it the same? Are there other neighborhoods that are cheaper to move into? Are there a lot of rentals? As you drive by homes, what are you seeing?  I’m just talking about the overall feel, pay attention to that overall feel.  You might be in a neighborhood where there are just no restrictions and you might be okay with that. You might not want to have restrictions.  But you still need to make some educated guesses of what is happening in your area.

Do I Need a Change

And lastly, decide if what you see warrants a change in your location or the way that you prep. If things are going down in your location, is that something that you are willing to deal with or is it time to move further into the suburbs or even further out rural?

And if you are seeing a lot of those changes, you need to decide if there’s a certain level that you are okay to live there and if not, you want to make sure that you are getting out when you can get the true value for your home while prices are high and people want to move in to the neighborhood still.

Right now, in Houston, home prices are going through the roof.  That will probably change soon. I think the market is starting to cool off a little bit, but it’s still a sellers’ market.

If there isn’t a manmade disaster of some sort, if the grid doesn’t go down because of cyber terrorism or because someone didn’t do the upkeep like, they kept talking about down here in Texas during the freeze, if it’s not, an emp, war or whatever, if we continue to limp along this slow decline is what we can expect.

It’s what will continue to happen!

You might realize that you are not necessarily preparing for the big event like you thought. Maybe you haven’t realized it before, but now you’re noticing it and now you are more aware.  But this is why we prep! This is why we do what we do!