13 FAQs About Preppers You Want To Know- Prepper Website

13 FAQs You Need to Know About Preppers! 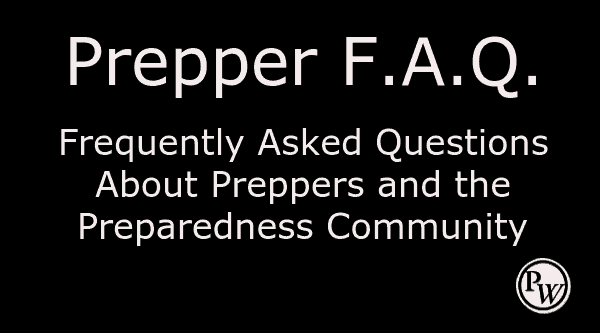 Frequently Asked Questions About Preppers and the Preparedness Community

What is a Prepper?

A prepper is simply someone who prepares.  Life throws curves at times.  Preppers do what they can to mitigate potential situations they can see like hurricanes, wildfires, flooding, blizzards and unforeseen disasters like tornados, terrorism, economic turmoil, and even job loss.  Preppers would rather prepare their families for a disaster than depend on the government or other sources for help.

“Prepper” is a modern term.  In reality, it is just common sense.  The term describes what individuals and families did before there was mass transportation of food and access to 24/7 stores.  For example, if your grandfather didn’t put back seed from the current crop of food, there wasn’t seed to plant the next growing season.  If your grandmother didn’t can the excess produce from the Spring harvest, there wasn’t fresh fruit and vegetables during Winter.  They “prepared” for the next season.

What is a Doomsday Prepper?

The term “Doomsday Prepper” was popularized by the National Geographic show, Doomsday Preppers.  Some episodes did feature well-known preparedness figures like Lisa Bedford, David Kobler, Scott Hunt, and Christopher Nyerges, but the show sensationalized preparedness and made the featured prepper look crazy.

For more on this read – Doomsday Preppers Doesn’t Represent Us.

What are Preppers Preparing For?

Preppers prepare for a wide variety of scenarios.  These scenarios can range from local to global situations.  Each prepper chooses for himself/herself why they prepare.  Every prepper usually has a different reason why they started to prep.

Some common reasons why preppers prepare are:

How Do Preppers Prepare?

What are Some Common Myths About Preppers?

People who don’t know any preppers or just go by what the media says, believe some crazy things about preppers. However, many of these things are not true of most preppers.  Many preppers are regular everyday people who have seen or experienced situations that cause them to be more responsible for their own lives, as well as the lives of their loved ones.

Some common myths about preppers are:

What Types of Skills Should Preppers Have or Learn?

The most important skill that a prepper can have is to be able to think for themselves and problem solve.  Preppers need to be able to be flexible and adapt to any situation that comes their way.  Problem-solving skills will be invaluable in getting through any difficult situation.

Preppers should also learn how to garden.  Gardening and producing your own fruits and vegetables is a skill that needs to be cultivated over time (pun intended).  Many people believe they can just put a seed into the ground and it will grow.  But preppers know that they need to build their soil and have experience with their local climate and seasons to effectively grow their own food.

Preppers should know how to start a fire.  Fire provides heat, cooks your food, can purify your water (boiling) and can help forge metal tools.  A prepper could learn multiple ways to start a fire, from using a lighter to utilizing a Ferro rod.

Self-defense and protection is another skill preppers should learn.  This could include conceal carrying a firearm or even learning how to use anything available as a weapon to defend oneself.  If a prepper purchases a firearm for self-defense, they are advised to regularly practice and get training.

How Much Food Do Preppers Store?

There is no specific amount of food that preppers store.  In fact, having a big amount of food in storage is expensive and if not managed correctly will go bad.  It is advised that preppers should build their food pantry slowly.  An important thing to remember is that preppers should store food that will be eaten by their families.  Although people will eat whatever is in front of them when they are starving, food fatigue is something to consider.  If preppers are purposeful and plan accordingly, they can stockpile food that everyone will happily eat.

Preppers should first start out with two weeks of meals based on a menu that is created.  Meals that are nutritious and based on canned and dried goods (beans, rice, pasta) will have the longest shelf life.  After two weeks of meals are achieved, the prepper should then focus on doubling the amounts of food that were stored.  That will give the prepper one month of food storage.  This same method could be repeated, with other meal types, as long as the prepper continues to rotate their food storage, using the most recently purchased food last.

What Are the Best Ways to Build Food Storage?

The next option that a prepper could use to build their food storage is to make their own long-term food buckets.  DIY food buckets are not difficult to make. Using mylar bags and oxygen absorbers, preppers can make food buckets that last up to twenty years. 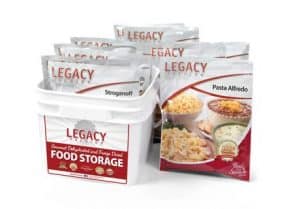 Why Do Preppers Store Water?

Without water, you’re dead!  Your body needs water to survive.  From a preparedness standpoint, this is one of the most important things a prepper can do.  Without water, your important bodily functions start to shut down within 3 days of normal activity.  This can be sooner if you are highly active.

Ready.gov recommends that families store 1-gallon of water per person for three days.  So for example, a family of 4 should store 12-gallons of water.  However, it should be understood that the 1-gallon per day number is based on water to drink and for cooking.  This amount does not include water for hygiene and to flush toilets.  The 1-gallon recommendation should be understood to be a minimum.  It is also recommended that preppers store more than 3 days worth of water.

How Do Preppers Store Water?

Preppers store water in a variety of ways.  Some of the most common are 2 liter-bottles, Waterbricks, and 55-gallon drums.

The most inexpensive way to store water is to use 2-liter soda bottles or plastic containers that held a beverage like tea or juice.  It is very important that 1-gallon milk jug type plastic containers not be used.  Milk jug type containers break down too easily.  Those wanting to store water can ask others for their empty soda bottles.  Rinsing these soda bottles thoroughly is very important!  Every bit of leftover soda must be removed so that bacteria does not grow in the water.  After the bottles are washed thoroughly, they should be filled with clean water.  Some preppers advocate to drop two drops of unscented regular bleach into the water for safety and to dump out the water and refresh it every 6 months.  Of course, the water should be stored in a climate controlled area of the home.

Another way preppers store water is to use Waterbricks.  Preppers can purchase Waterbricks on Amazon.  They hold 3.5 gallons of water in each “brick.”  Waterbricks are easy to stack in an interlocking system which allows them to stack without fear of falling over.  They are easily concealable when they are stacked in a box formation and covered to look like an end table. 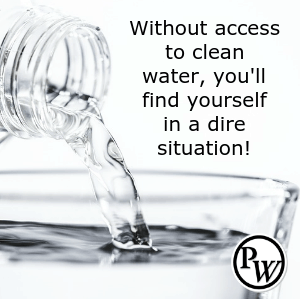 Preppers also use 55-gallon plastic drums to store water.  Preparedness minded individuals can purchase new or used drums.  If they are purchased used, you must make sure that the previous contents were food.  If not, they should not be used, period!  55-gallon drums that were used for food can be washed out and filled to hold clean water.  One of the issues with this method is that 55-gallon drums are hard to conceal and many people don’t want to house them in their home.

Why Do Preppers Filter and Purify Water?

The knowledge of knowing when water is safe to drink is vital to a prepper!  There are many methods to purify and filter water and every prepper is wise to know a few of them.

To filter water means to take out the impurities found in water.  This could be impurities that are seen with the naked eye like, dirt, rocks, pieces of wood or other such items.  Filtering water can also mean taking out impurities that are microscopic.  There are many processes that can accomplish this!

Water purification means to remove microscopic contaminants like parasites, bacteria, algae, and fungi.  Water that is not free of these contaminants can cause sickness like diarrhea and dysentery  For water to be considered purified, the process needs to remove 99.9999% of pathogenic bacteria and reduce viruses by 99.99%.

It is wise to filter and purify water to be safe in a preparedness situation.

How Do Preppers Filter Water?

The easiest way that Preppers filter water is by using a purchased water filter.  This can be built-in to a refrigerator, connected to the kitchen tap, consist of a portable system like a HydroBlu Pressurized Jerry Can, or even smaller systems like LifeStraws or Sawyer Mini-Water Filters that can fit into a bugout bag.

Water filters can also be made in the field, if necessary, by stacking layers of rocks, sand, and charcoal.  At the very least, a crude water filter can be made by passing water through a cotton t-shirt before entering another container.  This last method is not enough to consider water to be safe to drink, just filtered of visible contaminants.

How do Preppers Purify Water?

Water tablets are self-explanatory as you read the label.

Boiling water can also be used to purify water.  Water should be brought to a rolling boil for at least 1 minute.

Distillation is when water is boiled off to steam, passed through a tube or coils of some nature to be cooled and deposited in a clean container.  This process leaves the contaminants behind in the first container.  It is important to know that “everything” is left behind with the contaminants, including the “good” minerals found in water.

Another way to purify water is to use a WAPI.  WAPI stands for Water Pasteurization Indicator.  It was found that water doesn’t necessarily have to boil to kill off all disease-causing contaminants.  Water is pasteurized at 149 degrees Fahrenheit.  WAPI’s contain a special wax that melts at 150 degrees Fahrenheit.  WAPI’s are placed in the center of a water container with the wax end up.  When the wax runs down, the water has hit 150 degrees and is safe to drink. For more on WAPi’s – CLICK HERE. 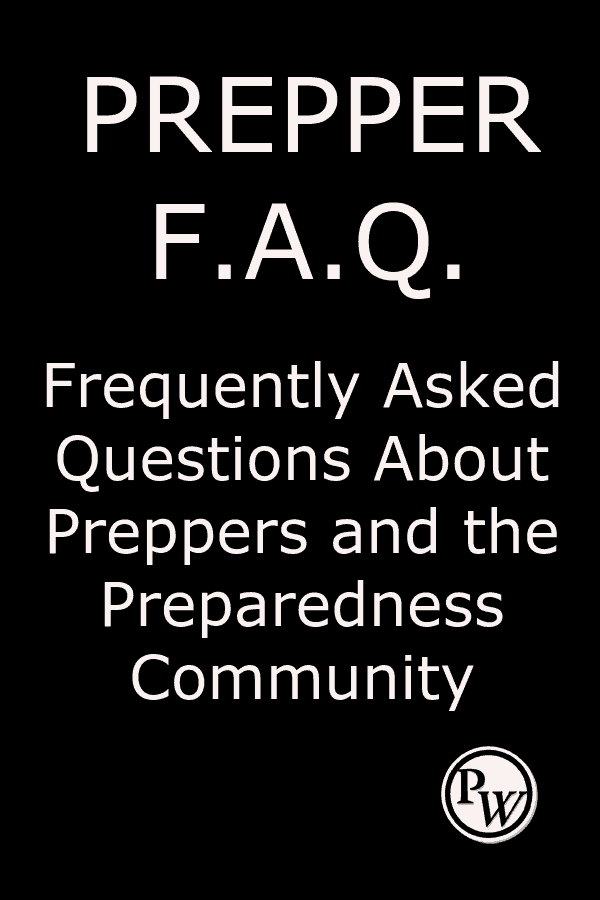 4 responses to 13 FAQs You Need to Know About Preppers!