A Prepper Movie the Whole Family Can Sit and Watch - EMP 333 Days!

EMP 333 Days – A Prepper Movie for the Whole Family 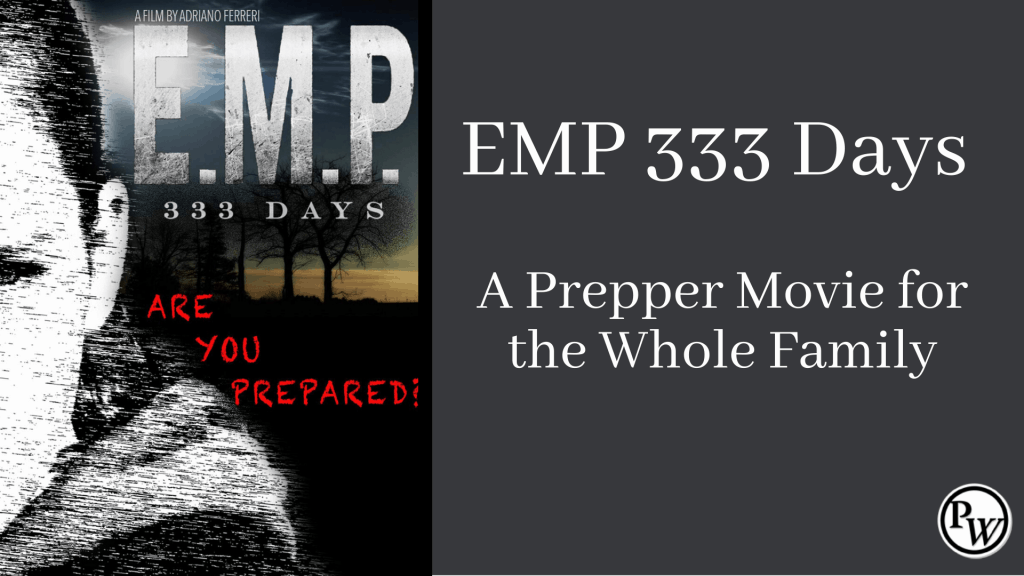 You’re looking for a prepper movie.  But you want to make sure that the movie you pick meets certain criteria.  Of course, it needs to be preparedness related.  You also want to make sure that you can show it to your family, so it needs to be clean of language, nudity, and gore.  Lastly, you want the movie to spark prepper-related questions so you can have some good discussions after the movie.  If I just described your current movie hunt, and you are looking for a prepper movie that the whole family can watch, then look no further!

The Plot and Main Character

EMP 333 Days is a movie written, directed and produced by Adriano Ferreri.  The movie is about a young 11-year-old girl, Niamh, who is staying with her grandmother when an EMP knocks out the grid and all electronics.  Due to her situation and grandmother’s unfortunate death, she needs to leave to try and meet up with her dad, who was on a business trip.

Because Niamh’s single dad was a prepper, he gave her some basic firearm training, survival information and the location of a cache with supplies and a map of a group that would help protect her.  The movie takes place during the 333-day journey that Niamh takes to get to the survival group her dad told her about.

My Reaction to this Prepper Movie

I might be a little weird, but when I watch movies, especially apocalyptic movies, I tend to think about the lessons the movie shares and how I can share those lessons with others who need to prepare.  I realized very quickly that EMP 333 Days was the perfect movie to introduce the topic of electro-magnetic pulse or even the grid going down, to those who have no clue what that would mean for our society.  Because the movie didn’t have the usual language, nudity, and gore that comes with almost every apocalyptic movie, I was excited to think that this movie was something the whole family could watch.

I often refer to my kid’s reactions when I made them watch American Blackout, a made for TV docu-drama by NatGeo.  I remember their unhappiness with me as I “forced” them to watch it.  But I also remember how their curiosity was piqued as question after question came when they realized that the docu-drama scenario was a possible one.

Because kids are so visual nowadays, movies and TV (really input Youtube here), grabs their attention and can be used to spark conversations that you wouldn’t have been able to do just bringing up a topic around the dinner table.  Do families still do that?

Related: Ways Preppers Learn and Acquire Knowledge and Some Recommendations

Other’s Reaction to this Prepper Movie

EMP 333 Days had somewhere between 20-30 reviews on Amazon before I first interviewed Adriano on the podcast.  At the time this article is being written, there are currently 89 reviews.  I hope to think that some of the reviews that were added are due to his interview and the influence of The Prepper Website Podcast.

With that said, I’m disappointed that the movie only has 3.5 stars. I’m almost sure that Amazon’s algorithms work as many others do.  The more attention something gets, the more Amazon or a social media will “serve” it up to their customers. So, I’m assuming that since more preppers have watched and reviewed EMP 333 Days, that Amazon was bringing it up in search results.  The problem is that there are a bunch of movie snobs out there!

As you read the reviews on Amazon, you can almost tell those who came from the podcast and those who were just looking for your typical apocalyptic flick.

Some of the more vicious reviews are:

Had high hopes. Amazon crap pile strikes again. – This is the Lifetime version of EMP. The real apocalypse will probably be a bit more eventful. The villains were silly. The kids never should have survived. Not very realistic. I wanted to like it, but it just got too hard to watch by the time the bad guys showed up again. I don’t know why so many gave this good reviews.

Takes about 333 days to watch! – Horrible homemade movie. Goes nowhere! Don’t invest your time in this garbage! Took me nearly 333 days to watch! Kept pausing cause it sucked so bad in all aspects of filmmaking …from screenplay to piss-poor acting! You have been warned!

8th minute is the only good minute to watch. – ..then you’re wasting your time. This mickey mouse nonsense, the girl with clean hair, clothes, whimsical behavior and narration is evidence of such poor writing and understanding. No way this girl and her gram gram would have lasted beyond 3 days. As long as there was any violence outside within the first 3 days, which there was, and would be, they’d be toast within hours. Couldn’t watch past 30 minutes. The chaos in Bushwick is more likely the first couple days.

Of course, there are more one-star reviews and more mean things that were said.  This was just a sampling.

But, there were also a lot of good reviews from people that understand the value of a good, clean apocalyptic movie.

Some of the five-star reviews are:

I’d watch it with my 12 year old and have a discussion about what is going on. – This isn’t a gory, zombie, alien, type movie. There was no nudity and just a few simple crude words. I like movies that contain all that, but I also appreciate a movie that can be well done like this and show what life might be like after an E.M.P. or other catastrophe. This is a movie I can enjoy with my 12 year old son and use it to explain how people behave in situations like this. I can think of no other movie I would allow my young son to watch about catastrophe other than this one. It stands out like that, and for that reason I give it 5 stars.

The youngest and innocent wins against the odds- A – Movie is very realistic, a father that teaches his eleven year old daughter the basics of survival, from shooting, a multi tool, survival living and living off the land. The father explains that things can unexpectedly happen and she should be familiar with how to do things in an emergency. Well, an EMP was activated and the world was without electric power, food and protection and you took care of yourself. Against, the odds and my thoughts this little girl survives bad men, food and living conditions eating off the land makes it to the fathers map location and becomes one of the perimeter guards. At was at this point early in the morning thought she would just shoot to kill any intruder, oh my, it turns out she verified the face and realized it was her dad that was hurt and on foot. What a excellent ending to a rough life! This movie is a n “A”.

Worth Watching. – Very Good Movie, well worth watching from beginning to end. The topic is one the Chairman Joint Chief of Staff released a report on in early 2002 (I believe) about the threat of EMP. It also stated that the US is a one bomb nation…one nuke detonated center and above the US at a specific height send the US back to the 1800’s. Its not a fancy movie. but well done!

Excellent Indy movie…but not for everyone – If you have a short attention span or have an unshakable faith that the Government will always be there to solve your problems, this is not the movie for you. If you’re quick to label those who consider the possibility of societal breakdowns due to cataclysmic events as ‘conspiracy theorists’ or ‘nutcases’ this movie is DEFINITELY not for you. The movie is different from most in many ways, particularly the pacing which is intentionally VERY slow in order to convey in a realistic way how the world has slowed down without the constant electrical hum of modern life.

It is a unique and extremely valuable movie for those who recognize the very real threat of an EMP weapon or a Coronal Mass Ejection and are interested in seeing how it might change the world we live in, and how the average person might be able to not only get by but to thrive. It reminds us how much we have already lost as a society and a culture… so much of what used to be known as ‘basic life skills’…elementary firearms competency, how to catch and clean a fish, what plants are safe to eat, situational awareness…these basic skills have been lost to so many because life today has become so very easy, and we forget (and many simply don’t know or ignorantly dismiss the idea) that it all can change in an instant.

I also appreciate the fact that the father figure was not the usual Hollywood template of a priapic, unfaithful, drunken, violent, useless, inarticulate and abusive loser. There are a lot of good fathers out there, but not many movies acknowledge that anymore…or how essential a father figure is to a child’s life.

Although the pacing initially caught me off guard, being accustomed to fast edits and breathless speed of everything in modern movies, I found that I enjoyed getting used to the different environment this movie created.

A worthwhile, valuable and meaningful movie that will never win an award and few will ever see. Sadly, that’s what happens to the best movies these days.

You see, these people get it!  They understand the value of a movie like this!

One thing that we all wish we had more of in the Preparedness Community is money!  That can be true for the director, Adriano Ferreri too!  Adriano directed and produced EMP 333 Days with his own money, on his own time.  All the actors, including his daughter, live in Adriano’s town and did this on a voluntary basis.  The location, filmed throughout all four seasons (333 days), was Adriano’s town and rural settings.  When you think about what Adriano had to work with to make this movie, you realize that he did an excellent job and produced a movie that is a true blessing to the Preparedness Community.

You Can Watch It for Free

If you do view it, would you take the time to leave a favorable review?  As the Preparedness Community, we should support those that make movies like this that are family-friendly and send a preparedness message.

Related: Listen to my Interview with Adriano Ferreri on The Prepper Website Podcast 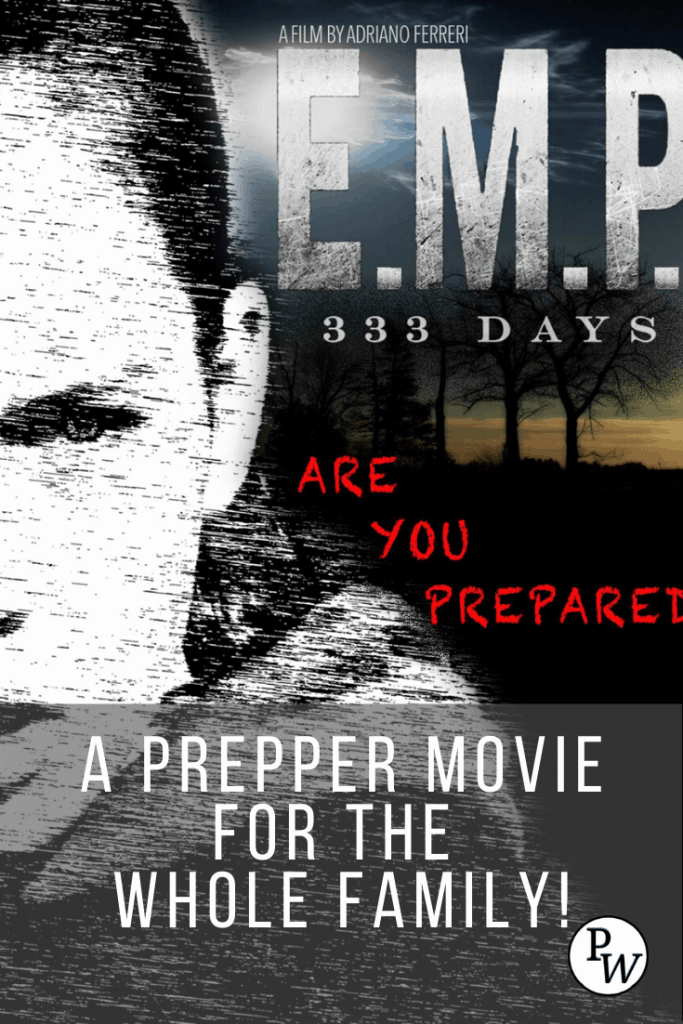