How Preppers Can Thrive in a Barter Economy - Prepper Website

How Preppers Can Thrive in a Barter Economy 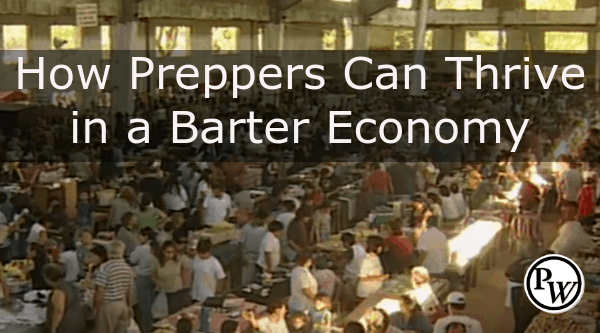 What Can Preppers Learn from Past Barter Economies that Will Help Them Thrive in the Future?

For a few years now, the Preparedness Community has been pointing to the economic issues of Venezuela and asking the public to take a good hard look at what is going on.  Our hearts go out to those who are suffering, and at the same time, our minds consider what we would do if we found ourselves in the same predicament.  One thing that we can definitely learn is how the people have adapted and found ways to continue living.  One major way that the people are surviving is through creating a barter economy.

The troubles that the people of Venezuela are going through are horrible and in all reality, really shouldn’t be happening.  Venezuela has a tropical climate and is an oil producing country. They should at least be growing their own food in the countryside.  This would help those who are starving.  But those in power, the elite, don’t care about the common people and make it hard on them at every turn.  While the elites have access to the food, medicine and all the power they want from their electric grid, the common people have had to make due with what they can scrounge.

One major way that the people of Venezuela are making due is by bartering.  Recently, an article on Reuters discussed how people were bartering for important needs.

“There is no cash here, only barter,” said Mileidy Lovera, 30, walking along the shore with a cooler of fish that her husband had caught. She hoped to exchange it for food to feed her four children, or medicine to treat her son’s epilepsy.

In the hyperinflationary South American country, where bank notes are as difficult to find as chronically scarce food and medicine, Venezuelans are increasingly relying on to barter for basic transactions.

Payment for even the cheapest of goods and services would require unwieldy piles of banknotes, and there simply are not enough of those in circulation.

Could you imagine having to barter for food and medicine for your kids?  This is something that most Americans today can’t even wrap their heads around.  Many will say that “it couldn’t happen here.”   I highlighted some of the pain that Venezuelan’s were going through in this article, “This is Why We Prep! This is Why We Stay Aware!.”  Make sure you watch the embedded video.  That video is heart-wrenching!  If you have kids, it will be enough to get you to rethink your preps!

But Venezuela isn’t the only country where this has happened.

Back in August 2015, I linked to this article on Prepper Website, “Greece reverts back to a BARTER economy as global financial system unravels.”  In this article by Natural News, the pain of economic collapse and the need for bartering in Greece was also being discussed.

“Greece’s finances and its national economy have both deteriorated so dramatically that now average citizens are being forced to do something they haven’t had to do since the country was occupied by Nazi Germany: Barter for their basic needs and essentials.”

And, if you’ve been in the Preparedness community for any amount of time, you are familiar with Fernando “Ferfal” Aguirre.  He wrote about his experiences of the economic collapse in Argentina in his very popular book,  The Modern Survival Manual: Surviving the Economic Collapse.  Argentina hasn’t really recovered from their collapse many years ago.  This video discusses one Barter Market Club that is located in an abandoned textile factory.

But the thing is, EVERY economy has collapsed at one point or another.  People who believe that it can’t happen in the United States of America are not critically thinking.  It is a possibility!   The economic fundamentals of the 2008 crash haven’t changed.  In fact, the Powers that Be printed even more money.  We are in even more debt!  Many say we have an economic system that is not sustainable.

Could an economic collapse happen here?  If it did, after your preps are used up, what will you do?  Could we get to the point where we have to barter to meet our everyday needs?  If so, what are some things that you should consider if or when we get there?

Prepper Considerations for a Barter Economy

Focus on Skills VS Stuff

Many articles will discuss items that you can stockpile.  Although there are items that make sense to stockpile, eventually what you have stockpiled will run out.  Instead, consider what skills you have to barter.  For example…

Can you teach a skill like canning or cooking from scratch?  Food staples will be more readily available than the processed food many are used to buying at the grocery store and fast food.  And although many in the preparedness community know how to can and cook from scratch, your common everyday American doesn’t.  They wouldn’t know what to do with flour, eggs, and a little oil.

Can you make home or vehicle repairs?  Do you manufacture pieces that may be needed for repair?  Can you grow fruit and vegetables and gather the seeds to sell?  Do you sew, knit and repair clothing?  Think through what you can do.  Many skills that preppers have are taken for granted by others.  The skills that you have that seem like common sense to you could keep you and your family fed in hard times.

Necessities are Important, But So Our Wants!

Like in Venezuela, people are bartering for needs.  The important things that are sought right now seem to be food and medicine.  But at some point, people will be wanting a “taste” of their former life.  They will want something that reminds them of the life they had.  It could be as simple as a piece of chocolate or a nice new dress.  The important thing here will be timing, security, and perception.

Selco, who experienced living through a true SHTF situation when Bosnia collapsed wrote…

As a result, coffee was very valuable. I mean very very valuable. Even some poor substitutes for coffee were very important and valuable. Same was with cigarettes. So depending where you live, check for those things, and have it in your storage. It can be coffee, cigarettes, tea, beer…

Check out what Fernando says about bartering in his video below.

Many prepper fiction novels eventually get to a point where there is a barter economy or the characters visit a Trading Post.  For instance, a trading post plays a prominent role in Mark Goodwin’s series, Seven Cows, Ugly and Gaunt: A Post-Apocalyptic Saga of America’s Worst Nightmare.  In the novel, the characters use silver to purchase the necessary items to survive and make life easier.  Goodwin’s novel is a post-apocalyptic EMP story.  The poop has really hit the fan in this one!

But in real-world scenarios, like in Venezuela, Greece, and Argentina,  the fabric of society is still intact.  Society hasn’t unraveled like it did for Selco in Bosnia.  In those countries, people still go to work (if they have a job), go to school and life goes on, although it really sucks!  In these cases, bartering will be a little easier, safer and more readily available as society is intact.

If you are going to stockpile items for an eventual barter economy, make sure you stock items that people really need.  The lists of barter items that articles have mentioned over the years are numerous.  Some ideas are food, coffee, alcohol, batteries, cigarettes and hygiene products.

A while back, I did a video for my Prepper Church account on Youtube on “3 Items to Stockpile – Even If the Poop Doesn’t Hit the Fan! You Won’t Regret It!”

Consider the Space You Will Use to Stockpile Barter Supplies

Lastly, another barter consideration you will have to think about is space!  Preppers are always needing more space to stash their preps.  Anything “extra” that you stockpile for a possible bartering economy shouldn’t take up the bulk of your space.

So as you consider items to stockpile, you should think about items that are necessary, but might not take up a lot of space.  Referring back to Mark Goodwin’s book mentioned above, one thing the main characters looked for were canning lids and rings.  They don’t take up a lot of space and in a real collapse situation, they will be really worth it!

Barter Economy, Will It Be a Necessity?

It is said that “Necessity is the Mother of Invention.”  If we ever get to a point where a barter economy is the way goods and services are exchanged, things will come together.  But those who are prepared ahead of time, those who have thought about all of this, will be in a place where they can quickly move to make decisions that will benefit themselves and their family financially.

So, are you going to wait till there is a collapse before you prepare?  Or does it make sense to put a little thought into what bartering might look like in the future? 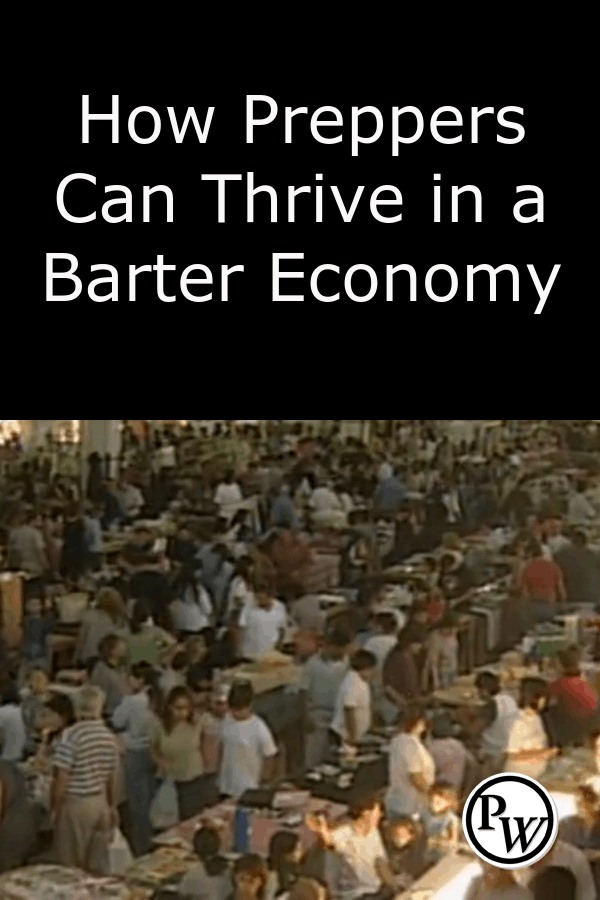