The Days of Noah: Conspiracy

The Days of Noah: Conspiracy 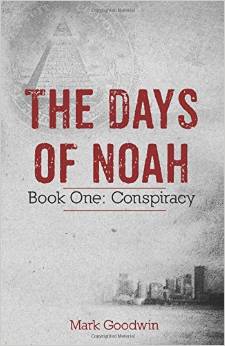 Goodwin does it again! After the success of The Economic Collapse Chronicles Trilogy, Goodwin has written another page turner with the release of his new book, The Days of Noah: Conspiracy. The book follows two characters, Noah Parker and Everett Carroll, in different story lines.

Noah Parker is a teacher who inadvertently becomes the victim of a far reaching federal government when he is accused of going against the federal government’s new curriculum. In the process, he and those close to him become very aware of the slow changes that have made the United States very different than what the Founding Fathers ever wanted for America.

Everett Carroll is a CIA analyst. His curiosity in anomalies that he sees in his daily work, gets the attention of his boss who begins to see in Everett, a younger version of himself. Everett’s boss takes him under his wing and opens up a world that only lives in conspiracy theorist minds. As Everett begins to realize that there is truth to what his boss is sharing with him, Everett begins the journey of making preparations that will make sure he survives what he and his boss are sure is coming.

Goodwin does a good job of weaving a very entertaining story while providing plenty of “food for thought.” Like his other books, Goodwin uses the topics and situations discussed to teach the reader about real life situations and concern in current events. For example, The Days of Noah: Conspiracy, discusses the great possibility of an economic collapse. And although this is a fictional book, Goodwin explorers various reasons why this would happen. This reaches into our real world! He also discusses what people should do to prepare for a collapse.

In another example, the topic of 911 comes up. One of Noah’s student’s shares:

“We have some big problems with the plane that hit the Pentagon as well. For one thing, no pictures of the impact have ever been released. The government should release the videos or pictures that prove the type of plane that crashed. Surveillance cameras are all over the area where the plane hit.

“Another major issue is the size of the hole made by the impact of the plane in the pictures of the Pentagon after the attack and before the wall collapsed. The hole is only seventeen feet wide, and the wingspan of the plane that hit it was one 125 feet. There was no debris that would be consistent with a plane crash of that size. No tail section and no wings that didn’t damage the walls. Where did the wings go?”

The class stared at Noah Parker like they were expecting him to debunk Allen Kramer’s theory, but he sat silently. He breathed a sigh of relief at the sound of the bell. Allen Kramer made one last comment. “A few well-made documentaries on YouTube cover a lot of the facts. Loose Change is a good one; also check out Ripple Effect. If you really want to know what the professionals think, check out the YouTube channel AE911truth. It represents a coalition of over 1,500 architects and engineers, including some very prominent ones, that disagree with the official story we’ve been told.”

The book is for anyone looking for an entertaining fictional read with some chilling theories that fit very well with our current world. There were times that I would stop reading and check the price of gold and silver on Kitco. With all the stuff I read, it was just kind of freaky.

Christians and Liberty Minded individuals will really enjoy The Days of Noah: Conspiracy. Goodwin uses a lot of Scripture and Christian viewpoints and pads it with a heavy dose of the Liberty movement. People who believe that there are big changes coming to our world might feel like they are reading headlines instead of a fictional book.

The Days of Noah can be purchased on Amazon. You can purchase it for Kindle, in paperback and audio formats. If you have a Kindle and have Kindle Unlimited

To read a review on The Economic Collapse Chronicles: American Meltdown – Click here.

To purchase The Economic Collapse Chronicles: