The Power of the Prepper Compound and the Curse of Doomsday Preppers!

The Power of the Prepper Compound and the Curse of Doomsday Preppers! 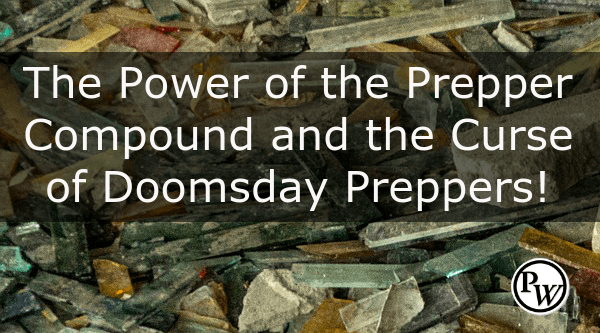 This is a very important topic!  But it might not be what you think.  You might be thinking that an article with “Prepper Compound” and “Doomsday Preppers” in the title would get you information on bunkers and shelters and such.  Well, if that is what you want, don’t worry! If you keep reading, I’ll point you to some resources. But this article is much more important!  I’m talking about something bigger!

The Prepper Compound is the key to preparedness.  It is the seemingly magical force that takes the newbie prepper on the journey to becoming an experienced or capable prepper.  It is the mechanism that sees preppers through to actually helping their families by being prepared for whatever might come in the future.

The Prepper Compound happens when preppers consistently and purposefully prepare.  Let me say that again in different terms, making forward strides in a consistent and purposeful manner will add up to get you and your family prepared for what will come!

Let me borrow a term from finances to help illustrate this concept.  Let’s look at the term, “compound interest.”

Compound interest is what many people who own mutual funds depend on.  The money their fund makes stays in their mutual fund account. The original funds build and increase allowing for their mutual fund to make even more money next time, which then gets reinvested again and again.

Let me use one more example from Chris Martenson’s Crash Course Chapter 4, over at Peak Prosperity.  Again, try to get this idea deep into your psyche.

“Suppose I had a magic eye dropper and I placed a single drop of water in the middle of your left hand. The magic part is that this drop of water is going to double in size every minute.


At first, nothing seems to be happening, but by the end of a minute, that tiny drop is now the size of two tiny drops.

After another minute, you now have a little pool of water that is slightly smaller in diameter than a dime sitting in your hand.

After six minutes, you have a blob of water that would fill a thimble.

Now suppose we take our magic eye dropper to Fenway Park, and, right at 12:00 p.m. in the afternoon, we place a magic drop way down there on the pitcher’s mound.

To make this really interesting, suppose that the park is watertight and that you are handcuffed to one of the very highest bleacher seats.

My question to you is, “How long do you have to escape from the handcuffs?” When would it be completely filled? In days? Weeks? Months? Years? How long would that take?

I’ll give you a few seconds to think about it.

The answer is, you have until 12:49 on that same day to figure out how you are going to get out of those handcuffs. In less than 50 minutes, our modest little drop of water has managed to completely fill Fenway Park.

Now let me ask you this – at what time of the day would Fenway Park still be 93% empty space, and how many of you would realize the severity of your predicament?

Any guesses? The answer is 12:45. If you were squirming in your bleacher seat waiting for help to arrive, by the time the field is covered with less than 5 feet of water, you would now have less than 4 minutes left to get free.

And that, right there, illustrates one of the key features of compound growth…the one thing I want you take away from all this. With exponential functions, the action really only heats up in the last few moments.” Source

By now you saying, “Ok Todd!  I get the compound thing. But how does this apply to preparedness?”

It applies because consistent and purposeful strides build over time, regardless if it is money or knowledge or something else!  The efforts you put into preparedness now, build upon each other!

“A powerful example of someone who does this is the legendary investor Warren Buffett:

One of the students asked what he could do now to prepare for an investing career. Buffett thought for a few seconds and then reached for the stack of reports, trade publications and other papers he had brought with him.

“Read 500 pages like this every day,” said Buffett, or words to that effect. “That’s how knowledge works. It builds up, like compound interest. All of you can do it, but I guarantee not many of you will do it.”

For Mr. Buffett, knowledge is power. That’s why he invested a lot of time in building it. He spent about 80% of his working day reading and thinking.” Source

The More You Gain Prepper Knowledge…

The fact is, the time you spend reading and learning about preparedness is an important part of getting prepared.  And the more you read, the more your preparedness knowledge grows. But you’re not just adding to your knowledge, it is compounding.  This happens because as you read and take in knowledge, you are making connections. Your brain is making connections on how it all comes together to get better prepared.

Read – The Prepper Schema: Getting the Knowledge You Need to Prep

The same thing happens with preparedness skills.  You read an article on a certain skill, like starting a fire.  You go out and practice that skill. Later, you practice various ways of cooking while you’re off the grid.  What you’ve learned about fire craft and how long wood burns, how long it takes to get coals, how hot it is at certain distances away from a fire, helps you to cook on an open flame.  It happens and you don’t even realize it!

This also happens with gear.  The more you read and understand about your gear, the more you use it, the more you see the various ways that you can use it in a survival or emergency situation.  Acquiring knowledge, skills, and gear all “compound” or come together to make someone better prepared.

The problem that I see in preparedness is that many don’t stick it out!  Many come to preparedness out of fear or a concern, but it is short-lived.  Although some preppers do prepare for a super volcano eruption type event, most prepare because our world is fragile and emergencies pop-up all the time (i.e. financial loss, natural events, health-related/personal emergencies). Most preppers are level-headed and I have found, very smart and wise!  Collectively, the Preparedness Community is rock solid!

Again, the issue is that some don’t stick it out and get to the point where it really starts to pay off.

To further exacerbate the issue, we are still dealing with the fallout of Doomsday Preppers!

Doomsday Preppers was a TV show by NatGeo that showcased preppers who were preparing for certain events.  The preppers that were showcased were usually sensationalized and made to look silly, although we know they are not really like that and even are respected members of the Preparedness Community. (See this article on names who you would definitely recognize!)

The show ran from September 2011 to August 2014.  I will admit it, when the show was on, the numbers on Prepper Website went through the roof!  The numbers would jump when an episode of Doomsday Preppers was on because it showed in my analytics.  I will also admit that I enjoyed being contacted by NatGeo and being sent pre-releases of the Season Premiers.  They would come with some cool items and I loved being recognized as a website owner in the preparedness space.

I was stupid!  I look back and regret it.  The show did more damage than good in my opinion.   As I realized my mistake, I penned articles like  – DOOMSDAY PREPPERS DOESN”T REPRESENT US!

And four years after the last show, we are still dealing with this.  Let me explain!

For the longest time, Prepper Website was ranked #1 on Google searches when anyone searched for “preppers” and “prepper.”  I’m not an SEO expert. It just happened! I didn’t do anything on purpose to get there. Someone told me that it seemed to be very organic, that  Google recognized my site this way.

I will say that I was thrilled and really loved having that position.

Now as I write this, I know some people are just going to say that I’m just upset that I’m not at the #1 position.  You can believe what you want. The reason it bothers me is what took the #1 place.

I’m not going to link to the article itself because search engines will look at that as a positive thing.  You can easily get to it if you want.

Although I have seen the six things that are discussed in the article before, in other articles, they are not the first items that I would want someone looking into preparedness to think is preparedness.  Condoms, cigarettes, and booze won’t get you prepared like water, food and a good plan.

To make it worse, the article is from cracked dot com.  The tagline for the website is “America’s Humor Site.”

Being a Prepper is Serious

I take preparedness seriously.  And although I have made mistakes in the past, I truly try to provide knowledge and insight that will help others get better prepared.  I’m disappointed that this is the first thing that people who look up “prepper” or “preppers” for the first time will see.  Update – Google now shows Prepper Website as #1 again for anyone who searches for “prepper” or “preppers”.  However, the article mentioned above is #2!  And the term “Doomsday Preppers” is all over the first page of search engines.

But I guess I shouldn’t be surprised either.  I foresee a time when the major internet players really try to stifle the great information you can find on preparedness websites. In fact, many will say that it is already happening. With Facebook changing their algorithms and marking alternative news as “fake” or putting a working tab on it, Twitter shadow banning conservatives, Google amassing a wealth of data points on each user, etc… I can go on and on.

With the freedom loving, 2nd amendment supporting, conservative-leaning, alternative news showcasing, Christian worldview, I bet it is a just a matter of time that Prepper Website and many other websites get little or no traffic from these sources.

A Prepper’s Alternative to Social Media

That’s why when I released my eBook, I didn’t go the Facebook Group route.  Instead, I chose to invest in creating a community forum where preppers and self-reliant minded people could come and post what they like and FIND IT later, not worrying that some internet business was going to delete it from their servers!

So regardless of what the big social media channels and search engines do, Prepper Website isn’t going anywhere.  I’m going to continue to plug away on Prepper Website and the podcast. Readers are going to continue to be able to link to awesome preparedness content.  I’m going to still help other preparedness websites get their content out in front of others to see. I’ve said that this is a micro biz for me. But in reality, this is a calling.

I hope that you continue to prepare.  Stay consistent and compound the knowledge, skills, and gear that you acquire over time, little by little.  When you do, you are doing it to put yourself and your family in a situation where they can survive and mitigate the crisis that will eventually come their way!.

What you do now will pay off later!  Keep it up! Stay in the fight!

If you are looking for “compounds” as in shelters, you can go over to the Tag Cloud and check out the tags, “bunker,” “community,” “shelter,” and “shelters.“ 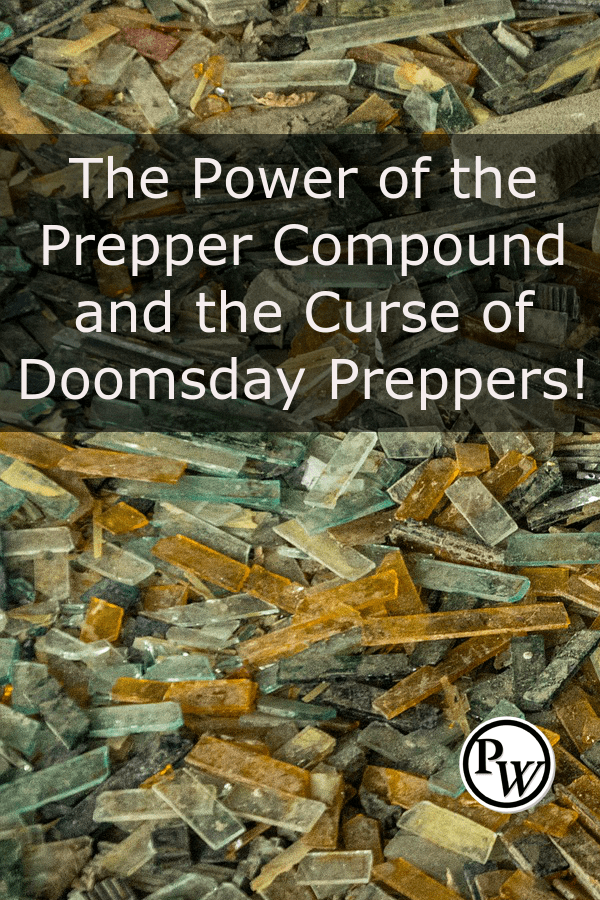